Spring 1723. There was a lot of activity at the old barnyard Groot Nibbelink in the Binnenheurne, located a few miles South from Varsseveld and situated at the outskirts of the forests of Idink. At the end of a busy working day the residents of Nibbelink went to bed, but were suddenly woken up in the middle of the night by a lot of noise from the cattle in the cowsheds. The farmer arrived first and saw to his nightmare a big inferno.

The Farmhouse Groot Nibbelink was on fire. Quickly the cattle was taken to a safer place, but the beautiful homestead is burned to the ground. The farmer is (in shock; taken aback?) defeated, and feels like a destitute man. But his neighbours are offering help, following an old local tradition and with joined efforts the rubble is cleaned up, new materials are supplied and within half a year the homestead was  rebuilt again.

Early September, when the Farmhouse Nibbelink was completely finished – according to old custom – the farmer decided to throw a party called stone-beer. Everybody was invited who helped out in the rebuilding of the Farmhouse. On that day – the 14th  september 1723 – there was a lot of joy on Nibbelink and in the late afternoon you could hear people singing, glasses were raised and nobody thought of sadness and worries.

In nearby Varsseveld it was pretty quiet, because most villagers had gone to  Nibbelink to party. Only the old vicar stayed on the Olde Wehme and some children and elderly women were present in the village. Also the blacksmith didn’t go to the party as – for some reason – he was not invited and was hammering the anvil. Glowing sparks flew from the anvil and some landed on his roof, made from inflammable material as for most of the houses in the village. A strong dry wind did the rest, and even before he knew, his house was on fire. 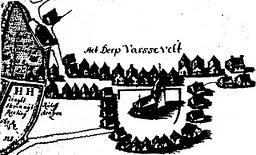 Varsseveld at the time of the big fire

Rapidly the fire spread from roof to roof to the adjacent houses and in the shortest possible time the whole village was on fire. Even the church in the middle of the village was not spared from the inferno.
The Vicar made a report and wrote:

“We, members of the church council and the people who were ear- and eyewitnesses, that through a terrible accident, however Gods worshipable and righteous judgment, our entire village including the tower and church was destroyed by the horrifying fire on the 14the September 1723. So Varsseveld is not to be found in Varsseveld anymore.

The blood flow is slowing in our veins, when we imagine the devastation which this enormous fire brought upon us. The fire overtook us when almost all villagers were out because of the to help to another man. That is the reason that some of us saved nothing and others so little. This tragic accident depresses us the more, because our winter stock is lost. 54 houses, 6 barnes, some distilleries, most lifestock is buried under the rubble and that all in less than 2 hours.

In the beginning there was hope the church could be saved. But in the middle of the fire and due to a lack of water, the church and tower turned to our disbelieve into a ruin. The four clocks melted down and were muted. The clockwork rotten, pulpit out of order, the pillars cracked and hanging to one side. The Vault had collapsed, so the scaffold and seats were crushed. It meant that under the blue sky baptism, supper and preach were to be held, because no house in Varsseveld was big enough to host 900 people”

(From: “A little history of the Laurentiuskerk and the old parish Varsseveld” door D.W. Kobes, 1972)

*Varsseveld is a little village, near the Dutch/German border in the East of the province of Gelderland, which area is called ‘Achterhoek’.